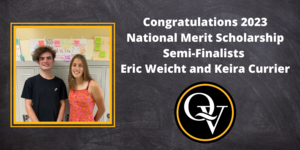 QVHS is proud to have two seniors named National Merit Semifinalists. Congratulations to seniors Eric Weicht and Keira Currier, who are two of 16,000 students nationwide to be named a semifinalist. This award is for students who have shown exceptional academic ability and potential for success in college studies.Eric and Keira will have the opportunity to continue to compete in the National Merit Scholarship competition where nearly $28 million will be awarded to 7,250 recipients.

Students are named semifinalists based on their PSAT scores from their junior year, which serve as the initial screening program. The national pool of semifinalists is less than one percent of all U.S. high school seniors. Semifinalists must then submit a detailed scholarship application in which they share details related to their academic records, school and community involvement, leadership, employment, and other honors and awards.

National Merit Scholarship winners will be announced between April and July of 2023.