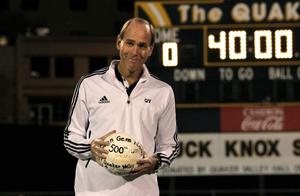 Congratulations to Gene Klein, a member of the Hall of Fame Class of 2020.
Retired Quaker Valley History Teacher and Boys Soccer coach Gene Klein was named to the WPIAL Hall of Fame Class of 2020.
Gene Klein’s name is synonymous with Quaker Valley soccer, but his impact on the game is seen across Western Pennsylvania. Klein successfully coached the Quakers for 29 seasons, with a six-year pause in the middle when he coached the Pittsburgh Riverhounds.
He won more than 500 boys soccer games, seven WPIAL titles, appeared in ten state finals, and won a state-record six PIAA championships at Quaker Valley. His first and last state titles came 15 years apart, showing the winning consistency that Klein maintained in his program. His best team was 1996, an undefeated group that was inducted into the WPIAL Hall of Fame in 2013. Now, their coach joins them. That team went 26-0 while winning WPIAL and PIAA titles. The Quakers were ranked No. 1 nationally by the Nation Soccer Coaches Association of America, and Klein was named as the NSCAA national coach of the year. The team outscored opponents 169-7 and recorded shutouts in 21 games. But that wasn’t the only championship team under Klein’s watch. The Quakers won PIAA titles in 1985, ‘91, ‘93, ‘95, ‘96 and 2000, a coaching resume that includes a remarkable four state titles in a six-year span.
His career record is 505-139-38, including a 40-7-1 mark in the state playoffs. In 29 years, his players accounted for 23 all-state selections and five national all-Americans. After leading Quaker Valley to the state finals in 2005, Klein resigned to become coach of the Riverhounds, a professional soccer club that he’d been associated with almost since its founding.
Prior to coaching Quaker Valley, Klein was the head coach at Carnegie Mellon for four seasons but came to QV to take over a promising high school program in its second year of existence. Along with coaching high school soccer, the former goalkeeper has worked extensively in youth soccer and currently is a scout for the youth national teams of the United States Soccer Federation. He’s also written three books about goalkeeping.
After 33-years teaching World History, Honors World History, and AP European History, Klein retired from Quaker Valley High School in 2015.
The 2020 Hall of Fame Induction has been postponed until May 2021.
Published April 14, 2020 Print