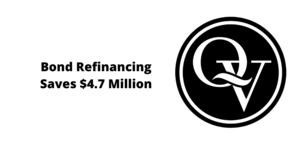 Quaker Valley School District has saved $4.7 million by refinancing a significant portion of its existing debt.

The original bonds were from 2010 and were used to pay for the renovation and expansion at Quaker Valley Middle School. The other bonds being refinanced, which were issued in 2005 and 2006 to pay for the elementary school renovations, were first refinanced in 2014.

"The timing was right to take advantage of favorable rates and save the district taxpayers millions in future debt payments. We have been monitoring the market while working on several capital funding scenarios to minimize the tax impact of the future capital projects,” explains Director of Finance and Operations, Scott Antoline. “This refinancing was a critical component to help reduce our debt burden and allow for some capacity to help limit future tax increases.”

The Quaker Valley School Board unanimously agreed to authorize the refinancing at the February 18, 2020 board meeting.

"The Board is very grateful to our finance team for swift movement to hit the market at such a low point and save the District millions of dollars.  We understand the importance of this as we continue to formulate funding plans for the new high school.  We fully intend to implement a fiscally responsible project that balances the value of long term benefit to our community and does so within the mandated fiscal constraints to minimize the potential tax impact,” says School Board President, Sarah Heres.