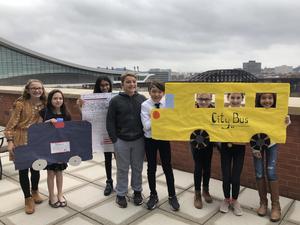 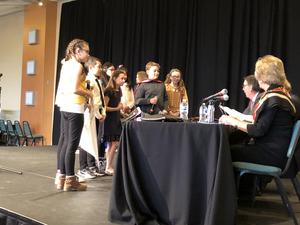 Fifth graders from Edgeworth Elementary participated in the 2019 Citizenship Challenge Finals on Dec. 17.

Supported by The Rendell Center for Civics and Civic Engagement, The Citizenship Challenge encouraged 4th and 5th grade students in the Pittsburgh area to express themselves regarding a current issue facing our democracy. Team Edgeworth contributed thoughts and ideas to the following question: The Founding Fathers are considered to be brilliant in relation to the government they created. Which part of the Bill of Rights do you think is the most important and continues to exert the greatest impact on Americans today?

Team Edgeworth believed Amendment 8: Bail, Fines, and Punishment, continues to have the greatest impact on Americans today. During the Citizenship Finals, the Edgeworth team performed a 3-minute presentation that creatively reflected their response to the above question. After the presentation, moderators, including Former Governor Ed Rendell, asked the team a few questions about their preparations for The Citizenship Challenge.

Team Edgeworth placed fourth out of eight teams. They received $250 to be used toward a program that promotes civic learning, as well as a civics library for the school.

Congratulations to our students for an outstanding job!