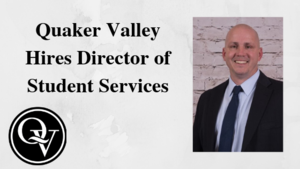 Mr. Mike Lewis joins QV from the Beaver Valley Intermediate Unit.
Quaker Valley School District welcomes Mr. Mike Lewis as Director of Student Services. The Quaker Valley School Board approved the hire on Tuesday, May 14, 2019. Mr. Lewis joins the District after serving as Director of Curriculum at the Beaver Valley Intermediate Unit 27. In addition to his current role, Lewis has also served in several roles at South Side Area School District including: elementary principal, director of special education, and assistant superintendent.  His career started in New Brighton School District where he worked as a paraprofessional and 2nd grade teacher before becoming a special education teacher.

He will join the District in June filling the role of Dr. Sally Hoover who is retiring in August after more than 20 years at Quaker Valley.
Published May 14, 2019 Print