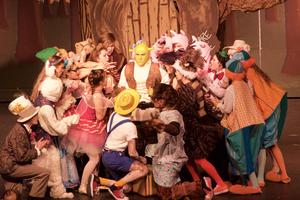 Congratulations to Angel Palladini and Ruby Sevcik!
Two QVHS students have been nominated for Gene Kelly Awards! Congratulations to Angel Palladini, who is nominated for Best Supporting Actress for her role as the Dragon and Ruby Sevcik who is nominated as Best Actress for her role as Fiona! The Gene Kelly Awards will take place on Saturday, May 25, at the Benedum Center.
Published May 7, 2019 Print