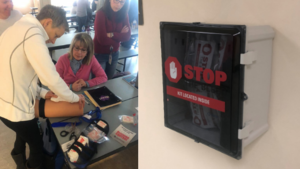 Quaker Valley School District received approximately $20,000 in Act 44 grant money to implement “Stop the Bleed” kits and training throughout the entire District. All QVSD buildings are equipped with public access bleeding control kit stations, similar to an AED station. Each public access station contains eight bleeding control kits that include a C-A-T tourniquet, pressure bandages, a pair of gloves, trauma sheers, and two rolls of primed, compressed gauze dressing. There are five stations at the high school and middle school, two stations at each elementary school, and one station at the district office and athletic stadium. The stations are strategically placed in the buildings where they will be easily accessible during emergencies. We have placed kits near the shop classrooms, family consumer science classrooms, cafeterias, gymnasiums, and maker spaces, while making sure they are accessible on every floor of the buildings. The District also purchased vacuum sealed single bleeding control kits for every classroom in all buildings. These kits are stored in the emergency go-buckets in every classroom and occupied space, such as the offices and common areas.

Stop the Bleed is a national campaign initiated by a federal interagency workgroup convened by the White House. It encourages bystanders to become trained, equipped and empowered to help in a bleeding emergency. No matter how fast emergency responders arrive, bystanders will always be the first on scene.  According to the Stop the Bleed program, “A person who is bleeding can die from blood loss within five minutes, therefore it is important to quickly stop the blood loss. Those nearest to someone with life threatening injuries are best positioned to provide first care.”

These types of injuries can be caused by everyday emergencies involving a variety of objects, including power equipment, kitchen utensils, broken glass, sharp metal, machinery, or even due to a blow by a blunt object or injuries caused by a fall. They can be a result of a number of accidents that can occur in our daily activities such driving, cooking, working, home maintenance, bike riding, hiking, hunting, and more. They can also be a result of natural disasters like earthquakes, tornados, and other severe weather. Recently, numerous lives have been saved using bleeding control techniques during man-made disasters such as shootings, stabbings, and explosions. The goal of the national initiative is to empower the public to make a difference in a life-threatening emergency by teaching them the basics of bleeding control and having the equipment readily available. The only thing more tragic than a death is a death that could have been prevented. More than 200 QV faculty and staff members have been trained by our partners from UPMC and Valley Ambulance. In the near future, the District will provide training to students.

The District also received an additional $5,000 in Act 44 grant money that will be used for crisis prevention and intervention training for faculty and staff.