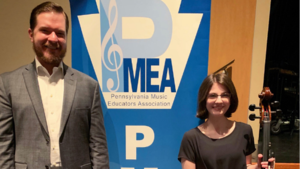 Congratulations to QVHS Senior Caitlin Croston who was selected to play the cello in the state Pennsylvania Music Educators Association (PMEA) orchestra.

Caitlin was first selected to districts by submitting an application detailing her experience along with a recommendation from QVHS Orchestra Director Mr. Cory Neville.

Only 24 students from 40 schools were selected for the district orchestra cello section. Once there, students must place in the top six to advance to regions. At regions, students must then place in the top eight to advance to states. The state cello section represents 24 of the best student cellists across all public and private schools in Pennsylvania—and Caitlin is among them!

“Caitlin’s progress over the three years she has been competing in PMEA festivals is incredibly impressive.  In her sophomore year, while Catlin made the cut to be selected to district orchestra, she placed 22nd out of 24 in the audition.  Last year as a junior, Caitlin was determined to improve her standing and did—placing 8th out of 24 students at districts, but narrowly missing the opportunity to go to states by two chairs.  This year, she was finally able to break through to regions, which was an accomplishment unto itself—but also did well enough to make it to states.  Her story is a testament to the improvements and progress any student can make with hard work, dedication and a growth mindset,” says Neville.

The all-state orchestra this year is being conducted by Daniel Meyer, who in addition to being the Director of Orchestral Studies at Duquesne University and music director of several regional orchestras, is perhaps best known for being a former assistant conductor of the Pittsburgh Symphony.

“It is an incredible opportunity for high school students who are at the highest levels of musicianship to get to work with a professional conductor with his experience,” adds Neville.